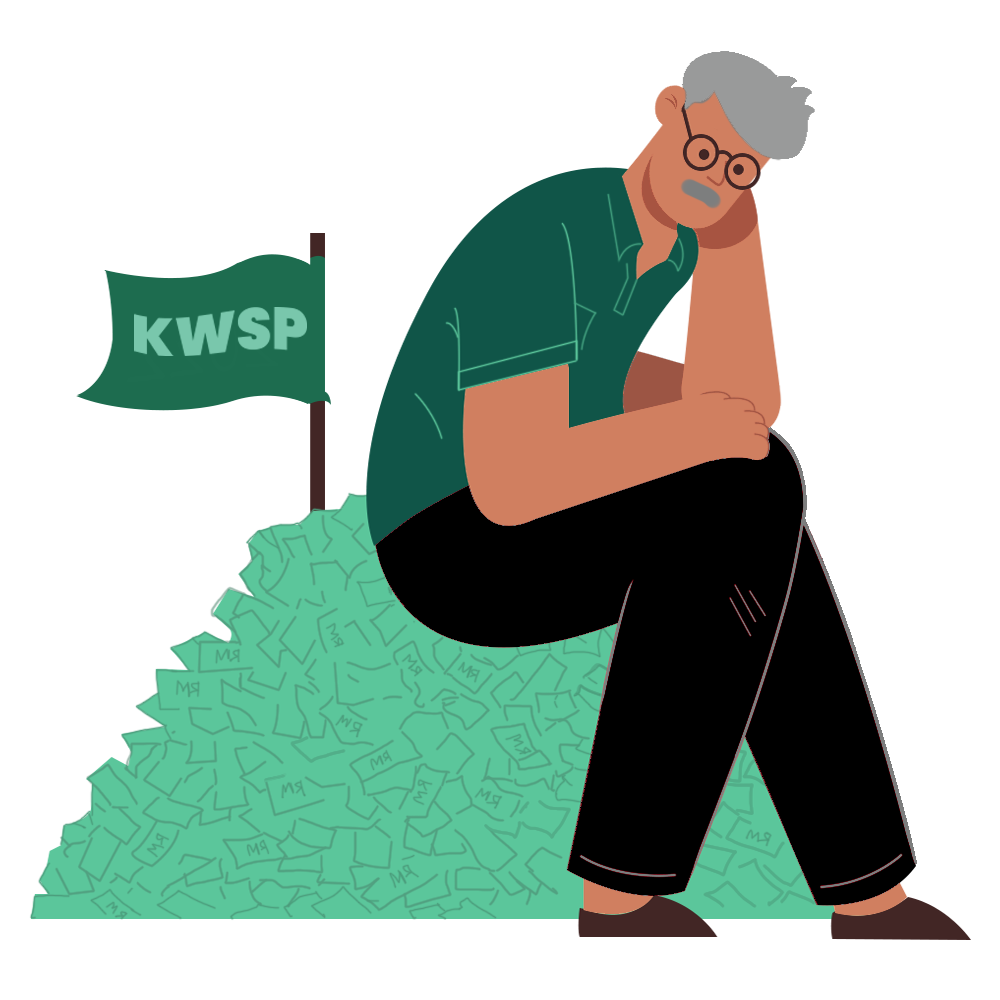 Do you have enough for retirement? Let's find out

Understand the implication of early withdrawal from your EPF savings with this interactive calculator.

Last Friday (April 1) marked the beginning of applications for another round of “one-off” Employees Provident Fund (EPF) early withdrawals that Malaysia has seen over the past two years, following three previous schemes - i-Lestari, i-Sinar, and i-Citra.

A total of 6.3 million people qualify for the latest scheme where a minimum of RM50 and a maximum of RM10,000 can be withdrawn and credited to their bank accounts from April 20.

The EPF provides a decent return and is a relatively less risky investment, allowing members the opportunity to build their retirement savings. But is that still possible after this fourth round of withdrawals?

Malaysiakini aims to help you better understand the impact of early withdrawal from your EPF accounts, highlighting changes to the growth of the fund, taking into account the magic of compound interest.

Enter your information below to see how your money can grow in time for retirement.

How much do you need for retirement?

The EPF’s basic savings targets a minimum of RM240,000 needed to fund a person’s retirement from 55 to 75 years old. However, that varies according to each member’s commitments.

Using the predicted data in the previous calculator, input your monthly expenses below for further clarification on how much you would need during retirement and your yearly savings.

For those struggling to make ends meet during the Covid-19 pandemic, returns locked in EPF accounts mean little when they face bankruptcy if they can’t make their loan payments today. They need urgent help or they may not even make it to retirement.

The opposition has long argued that it is the government’s responsibility to provide aid instead of making people dip into their retirement savings. But the government is also facing a revenue shortage due to economic stagnation from the pandemic.

Early EPF withdrawals are frowned upon by the financial savvy. Some movements, including the Financial Independence, Retire Early (Fire), even discuss how to put more money than legally required into one’s EPF accounts.

EPF chief executive officer Amir Hamzah Azizan cautioned against a fourth round of withdrawals out of concern its members may not be able to afford retirement.

A survey conducted by the Social Wellbeing Research Centre (SWRC) of Universiti Malaya found that more urban EPF members made withdrawals via the i-Lestari and i-Sinar schemes than those from rural backgrounds.

Among the respondents, 84.6 percent and 76.8 percent who withdrew from i-Lestari and i-Sinar respectively used their funds for daily expenses, while 46.1 percent and 55.5 percent used it for loan repayments, such as for cars, housing, and credit cards.

A significant proportion of respondents, 35.4 percent and 40 percent, also used the money to fund their children’s education during the movement control order (MCO), while 32.7 percent and 34.8 percent used it to pay their house rent.

A similar survey conducted by the UCSI Poll Research Centre reported 32 percent of 809 respondents who withdrew from the i-Sinar scheme, spent the money on home repairs or minor renovations.

While there are legitimate needs for the withdrawal, there have also been instances of financially questionable decisions.

An example of this includes a man in Terengganu who reportedly used RM1,080 of his RM5,000 i-Sinar withdrawal to install 11 speed bumps outside his house, claiming his sleep was often disturbed by vehicle noise.

Finance and tax expert Chua Tia Guan cautioned against registering for the latest round of early EPF withdrawal and said to only do it if one is in dire need, as the future impact may be severe.

After an estimated RM110 billion was withdrawn in the two years from the fund’s Covid-19 related measures, savings among EPF members in the fund have been set back by almost 10 years.

To add to this, Malaysia is on the cusp of becoming an ageing society, with over 5 million of the population expected to be over 60 years old by 2030. This is also the minimum retirement age of civil servants, which heavily impacts the large pensioner population upon retirement.

The EPF’s target of RM240,000 needed for retirement is mainly a projected figure and may vary based on the cost of living in different cities and by different household categories.

According to research done by Universiti Malaya, a single senior citizen who lives in the Klang Valley area is estimated to have higher monthly expenses of RM2,490. This is compared to people in Alor Setar, Kedah who require less - approximately RM1,990, as shown in the table below.

Citizens may also be forced to take into account the gradual decline in health during those years, with chronic diseases such as hypertension and diabetes being the most common among Malaysian adults. While the country has relatively good healthcare, this may cause a significant economic burden in the future.

Associated Chinese Chambers of Commerce and Industry of Malaysia (ACCCIM) finance and planning committee chairperson Koong Lin Loong told Malaysiakini the impact goes beyond just EPF members not having enough funds, in what he calls a “triangle impact” - involving members, the government, and the collective social environment.

“It doesn’t just stop at members not having retirement funds. This would impact the government, which would need to provide assistance. And if the government doesn’t help, it would lead to social impacts. What happens to these people then?” he said, adding that it may lead to high homelessness rates and poor living standards among the elderly.

Should the government get a free pass?

Political leaders have positioned themselves as champions of the people by allowing contributors to withdraw from their retirement savings ahead of time.

But the public needs to keep in mind they are being made to dip into their retirement savings because the cash-strapped government is unable to fulfil its obligations in protecting the people, after decades of allowing the fiscal deficit and government debt to balloon.

Finance Minister Tengku Zafrul Abdul Aziz has been vocal about the financial implications of this withdrawal, claiming the EPF would have to further dispose of its overseas investments, amid uncertain market conditions in light of the Russia-Ukraine crisis, as well as halt domestic investments.

This would potentially have adverse effects on domestic equity and bond markets.

Zafrul also questioned if it was fair for EPF members who have never withdrawn their savings through previous early withdrawal schemes to receive a lower return on their savings.

He added that an additional withdrawal may result in members retiring below the poverty line, causing the ‘Malaysian Family’ to bear a huge burden in the future, especially in the case of a recession.

In contrast, Singapore has accumulated multi-billion dollars of reserves over the decades and was able to utilise its war chest amid the pandemic.

Amir has pledged to rebuild the EPF’s loss by urging the public to subscribe to voluntary additional contributions capped at RM60,000 per year, or increasing monthly contribution rates above 11 percent to speed up the replenishment of funds.

However, Khazanah Research Institute revealed that from the total active EPF members of 7.6 million in 2019, registered members in voluntary schemes made up a dismal 2.7 percent or roughly 200,000 members.

According to Chua, without funds, members will be required to unofficially extend their retirement age to sustain and pay living expenses beyond the age of 60.

“Those who do not have a retirement fund, they would have to work after their retirement. I wouldn’t suggest, however, that (Malaysia) extends the retirement age because that has to go hand in hand with (the country’s) life expectancy.

“So these people would have no choice but to continue working to sustain or pay their living expenses unless, of course, they can get a family member or children to support them,” he said.

According to the Malaysia Ageing and Retirement Survey (MARS) 2018 that was conducted by Universiti Malaya, 81 percent of respondents (1.59 million individuals) preferred to continue working even after their retirement.

Economists have called for a universal pension scheme to overcome the adverse effects from EPF’s previous withdrawal schemes. The proposed system could be funded by grants from the government, income from public investments, and contribution schemes.

Khazanah Research Institute recommended a social insurance pension as an alternative. This would involve compulsory monthly contributions of RM53 for at least 36 years to receive a monthly annuity equivalent to the future value of the poverty line per capita for a lifetime starting from the age of 60.

While this sounds like a solution in theory, it is difficult to make it work in reality. EPF announced earlier this month it was not ready to introduce such a method, fearing “undue consequences”.

Koong, however, believes due to ineffective social safety nets, the best solution would be for the government to improve the business environment which in turn will create more employment opportunities with higher pay.

He said this would increase the disposable income of EPF members and result in higher EPF contributions.

“If a person earns RM1,000, their 11 percent (EPF contribution per month) would be RM110. However, if they earn RM2,000 their contribution is RM220 but they would also have more disposable income, even though their monthly percentage contribution is the same.

“The government would have to create these kinds of environments in order to increase the disposable income of members. This would allow EPF’s funds to increase (at a faster rate).

“As we know, the EPF is an important investor in Malaysia’s capital market, this would improve the market. It is merely a ‘chicken and egg’ situation,” he added.

Unlock the article by subscribing to Malaysiakini for RM60 for three months or RM200 a year.

Project coordinator
Lee Long Hui
Researcher & Writer
Raveena Nagotra
Designer & Developer
Yan Jing Tian, Ooi Choon Nam & Lee Long Hui
Illustrator
Syariman Badrulzaman & Yan Jing Tian
Return to top
Kini News Lab
Kini News Lab is a dedicated team in Malaysiakini that specialising in visual storytelling and data journalism.
TwitterFacebook
Like what we do?
Consider giving a small donation as a token of appreciation so that we can continue our works.
Support us
Subscribe to Malaysiakini for for RM60 for three months or RM200 a year.
Subscribe now